Week 1 of working on Blip has been a huge boon to me. I’ve set out to create the basic “new entry” window. Now I thought that would take me 1-2 days tops. That turned out to be wrong and I’ve spent the entire week on getting just that done. That was frustrating.

But, with a new approach I’ve managed to get through it. Before I’d throw in the towel and give up. This time I persevered. And that feels amazing. Towards Friday last week I ended up getting everything done I’ve set out to do. With the sole exception of writing this particular post. Thats OK though. I’ve learned new things. Increased trust in myself, and overall had fun, despite some frustrations. Big win right there for me!

I’ve even come out of this with three extra blog posts:

With these being the obvious road-blockers I’ve had over the week.

For this week I plan to add persistence, that is, saving entries to disk. I’ll probably end up using SQLite for this, rather than writing each entry to a JSON-file, which would work as well.

For now, this is how Blip looks at this point: 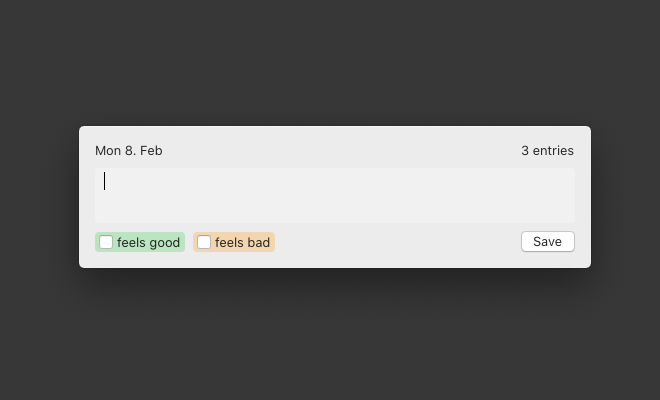